Love What You Do: Create a brand strategy that stands above the rest 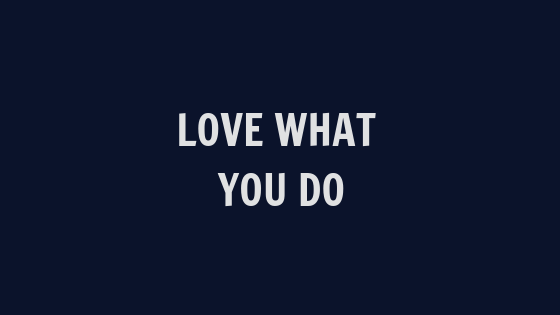 One message you’ll find plastered on home décor items is “Do What You Love.”

And I think we could all agree that this advice is most likely what motivated us to pursue this dream we’re living {entrepreneurship} in the first place: We want to do what we love! And kudos to you, friends, because you’re doing it! You are!

You didn’t listen to the negative self-talk, you didn’t allow yourself to be paralyzed by overwhelm… you believed in yourself, established yourself as a leader in your field, and went for it.

Let’s stop for a second and celebrate that {seriously, give yourself a pat on the back, do a mini-dance party, or take a moment to write down how freakin’ amazing you are}.

Okay, welcome back from your celebration. Our challenge to you today, now that you’re doing what you love, is this: Remember to love what you do.

Wait… how is that a brand marketing strategy?

And isn’t that the same thing as “do what you love?”

No, there’s a difference. {Although we could probably add to the statement, to sum it all up, and say “Do what you love… with love!” Now we’re talking!}

Here’s a question: Do you ever find yourself going through the motions, so focused on DOING that thing you do that you forget to LOVE it?

You know what we’re talking about. That place where you’re so busy taking care of your business that you put yourself on auto-pilot and forget to take time to emotionally invest? Or maybe you’re just worn out and you are trying to just keep on keepin’ on and you don’t feel like you have much left to give?

And that’s no surprise. With content to create, launches to plan, a team to manage, events to attend, and clients to serve… you have a lot on your plate.

It’s not hard to get so focused on the day-to-day responsibilities {and that includes crafting a perfect message} that you forget to stay emotionally connected to it.

It’s not like I didn’t have the elements of a PB&J. {I mean, how hard could it be, anyways? We’re not talking rocket science here.} I followed the steps, even adding in a few special tricks that she claims makes it better {i.e. spread the jelly all the way to the edge of the bread}.

But if you asked me how I really felt about making that sandwich, I would have to admit that it wasn’t my favorite thing to do. See, I’m not the cooking-type. In fact, making a sandwich is about as complicated as I prefer to get in the kitchen. It’s very much my version of “going through the motions.”

If I were to make you a PB&J and plop it down in front of you, you would probably describe it as “okay.” It would be “fine.” Definitely just your average, nothing-to-see-here kind of meal.

But if you had a sandwich from my mom, you would taste the difference. It shows!

A brand strategy that tastes good

But there is something that you can do to get an audience’s attention, and it’s free. It gives you that extra boost, it makes you stand out among the rest: It’s injecting love into every aspect of your business, even the parts that you’re not so crazy about.

As entrepreneurs, there are often a hundred-and-one things running through our heads, and taking time to connect all of that to our hearts requires intentionality.

Here’s the deal: It’s not like my mom wakes up every day and lives to make PB&Js. But when she DOES make them, she puts her heart into it. And you can do the same thing with your business.

Intentionally reconnecting with your brand

Ask yourself: what motivated you to become an entrepreneur in the first place? Wouldn’t you say, after all the other reasons, that the basis of it was because of… love? You believed in your message and in your big, world-changing idea enough to take a risk and establish yourself as a thought leader with something important to say.

Hollywood would define love as a rush of emotion, that heart-stopping feeling you get when you are in the early stages of a relationship, when you’re practically giddy with excitement.  Starting a business or stepping forward as a thought leader with a message can be the same way. We are floating on a cloud because we’re so enamored with all of it.

But wiser people would tell you that after the initial infatuation stage, real love is a day-in and day-out choice you make, not so much a noun, but rather a verb.

Love is best displayed in kind words, consideration, sacrifice, and action. And so we are saying this: Love what you do, friends. Choose to love it, all over again.

To be successful, the first thing to do is fall in love with your work. — Sister Mary Lauretta

Treat it like a relationship, because, in a way, it is.

A relationship with your brand? Yes!

Think about it this way: You sacrifice for your message. You put your message above your own whims and emotions. {i.e. When you are having a rough day and you just want to call it quits, you choose to stay put. You choose to wake up again and live that dream. YOU ARE COMMITTED. Because you made it this far and you are NOT a quitter!}

You don’t want to disconnect from that initial feeling of WHY you started this journey in the first place. As you remember what first drew you to this journey, the life you had before, the dreams you had in mind, the REASONS you wanted to take a big leap of faith and pursue this dream, etc., you stay connected emotionally, which shows in your message. People FEEL it.

It sets you above the rest because there is an emotional element there that is attractive. That passion is also what allows you to fill gaps in your industry and serve your audience with authenticity — which is tied into the “innovation” element of a brand marketing strategy that won’t fall flat.

The only way to do great work is to love what you do. — Steve Jobs

Those things you don’t love

Now, let’s talk more about how love is a choice.

No, we are not saying that, if you are creative, you have to love crunching the numbers. No, we aren’t saying you have to suddenly adore accounts receivables. You don’t have to become passionate about cold calls and you don’t have to fall deeply in love with public speaking.

But if you can re-frame those tasks that make you feel paralyzed and think of them instead as tools that allow you to live the dream you are living and share your big idea with the world, then they become more, dare we say, “palatable.”

While some people out there simply love making sandwiches, for many it’s just another tool in the toolbox of keeping people fed. But why are some sandwiches better than others?

Because the act of making a sandwich is connected to a deeper emotion. Whether that’s love for the person they’re making it for {the audience}, appreciation for the ability to make a sandwich in the first place {gratitude}, or just plain commitment to the task at hand {and a determination to do it well}, there’s something deeper going on.

That “something deeper” makes their voice and their message stand out from the crowd.

Everybody loves a lover

There’s an old saying that goes, “Everybody loves a lover.” What does that mean? It means people are attracted to passionate people. Ever known someone in love? They might make you roll your eyes a little sometimes, but most of the time they just make you smile. It’s attractive.

Case in point: The Bachelor.

The media has exploded with suppositions and interviews and articles about how much the various players and participants must love each other. {Including our friends and clients over at the Wright Wellness Center, who have a fascinating podcast dedicated to analyzing the relationship and communication skills that show up — or don’t — in each episode.}

And whether it’s real or a publicity stunt, you can’t argue with the fact that people are PAYING ATTENTION… just in case it’s real. Because who doesn’t want to get swept up in the magic?! {Don’t answer that… }

How does this relate to your brand marketing strategy?

Well, everybody loves a lover. Do you love what you do? People admire that. They sense it.

Your audience is going to be drawn to that. This is the part of your innovation. It’s how your heart and your passion infiltrate your message. It sets you above the rest and lets you stand out in your field. It makes your message compelling and gets your audience’s attention… the right audience. {The people that will want to work with you and who will want what you have!}

If you were struggling in a relationship with your significant other and found your love growing cold, you would most likely invest some extra time and energy into fixing whatever’s broken. If you’re feeling the same about your brand and your business, here are a few things we recommend to reignite that spark:

Infusing the love into your brand strategy

When you’re back to loving what you do, the next step is to make sure that your content and your message reflect that. If your heart is full but the words aren’t coming out like you want them to, it’s time to call in the pros.

Our Copywriting Character Quiz is a great starting point in helping you define and refine your message, clarify your voice brand, and make sure the content you are putting out there accurately reflects those amazing ideas that got you where you are in the first place.

Helping you with your messaging and your voice is what WE love to do, and we’ve rounded up the best of our best to make sure your copy shares your vision, reflects your voice, and increases your bottom line.

What’s not to love?!

Still not sure your content is giving your audience the feels? We have a great resource on reconnecting with your core that walks you through how to harness your passion and share it with the world.