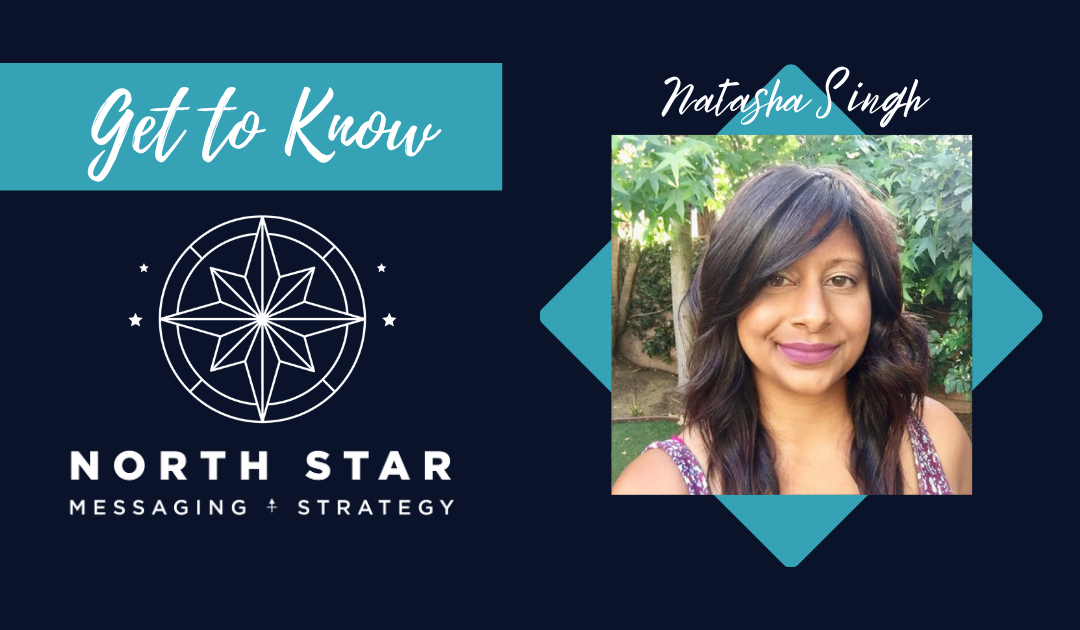 Each month, we’ll introduce you to one of our amazing team members. Today you’ll meet Natasha Singh, one of our fantastic project managers.

Natasha joined North Star in 2019 as its first dedicated project manager, and she’s been an invaluable member of the team ever since! A SoCal native, Natasha’s spent most of her life on the West Coast, except for a brief one-year stint in the Big Apple.

After graduating from UC Irvine with a psychology degree, she joined Amgen as a sales and marketing administrative coordinator, working there for six years. She also worked in administration at a law firm, a non-profit organization, and a pediatric speech therapy office before coming to North Star. She still lives in California with her husband Vinnie, their sons Rohan, Arin and Kyran, their dogs Leia and Obi, and their betta fish Supey.

Q: You’ve been in administration for most of your career, whether as a coordinator or project manager. What do you enjoy about that role?

Natasha: For as long as I can remember, I’ve just been one of those people who’s very organized and detail-oriented. That’s kind of been my whole thing ever since I was in grade school. All my tabs were organized in my folders, my crayons were organized, everything. That’s just my personality. So it just fits really well. I like project managing and making sure companies, especially small companies like North Star, thrive and improve. I’ve worked at big companies and small companies, and I really like the small feel of North Star. I feel like I can make a bigger impact with my work.

Q: Did that come from a parent, a teacher? Was there someone that was always on you to stay organized?

Natasha: No, I just think it was my personality, I was born with it. My father was very organized as well, so I think it’s in my genes. It’s how I’ve lived my life, just to get through the day, I have lists and spreadsheets for personal things, that’s just who I am. It just comes out in every possible way.

Q: Were you one of those kids that would get a Trapper-Keeper and get really excited about it?

Q: When did you realize keeping organized was something you’re good at and could make a career out of?

Natasha: I majored in psychology, and at first I was going to go into academia, get my doctorate and go that whole route. But when I was graduating, there was nothing I felt like I wanted to spend the next 10 years of my life researching. I didn’t have a set plan already, like, ‘this is what my thesis is going to be on, this is what I’m going to spend the rest of my life getting into.’ So I thought, let me take some time and instead of going to grad school, let me go get a job and see what I can do with my life right now.

Right out of college, I started with Amgen, the pharmaceutical company. That was the big company to get into where I was living at the time. If you got into Amgen, you were set. And it worked out really well for me. I really enjoyed the job, and people really liked my work, so I just fell into it.

Q: What were you doing there that really clicked for you?

Natasha: I did a little bit of everything. It was a huge company; just where I was working, there were 12,000 employees. I had so many different roles. I did calendaring for the managers, I did project management for sales. Any type of project, anything that they would need anybody to do, I would do it.

I’d worked for a law firm in college, but this was my first time in a full-time job. There are some things that are transferable, but I definitely feel like every job I’ve had, I’ve had to learn new skills every single time.

Q: So what led you to North Star?

Natasha: I’d left the pediatric clinic, and I still had one of my sons at home, and so I was looking for something where I could work part-time.

I saw the North Star ad and I loved it! They do such a good job with their job ads. When I recorded my application video, I said this ad reads as if you were writing about me. Everything that they’d said in the ad, it was like ‘yes, that’s me!’ “Super-organized, can’t hold your tongue when you see a bottleneck.” Yes, that’s me, me, me! I saw the ad and I thought, ‘this is the perfect job for me.’

Q: What’s your favorite part about working at North Star?

Natasha: Everyone is just very smart and supportive and hardworking. I think that is sometimes hard to come by, to be honest. I’ve worked with so many different teams and it’s such a different vibe when you’re working with like-minded people who care about the work, and have those qualities. I think it’s a testament to Jessi, Marie, and Brigid—they built this team and I think they have a really great eye for people who are going to bring a lot to the team. And also they themselves are really amazing people. I’ve had a lot of great bosses in my career, and some not-so-great ones, and they’re up at the top of that great list. They’re good, kind, human beings. They care about the company, but more than that, they care about us as people, not just as employees.

Natasha: It’s amazing. It’s really amazing. We’ve just grown so much and it’s so nice to have a sounding board. Before it was just me and Brigid. Now having two more people who are doing it with us…it’s awesome.

Q: Where do you feel like you’ve been able to make the biggest impact for North Star, internally?

Natasha: I think the biggest impact I’ve had is just helping Jessi and Marie and Brigid roll out new processes, coming up with ways to fill gaps in efficiencies, things like that. Time tracking is a big one: previously only a few people did it, but we really wanted to make it a standardized thing and roll it out to the larger team. From that we’re able to pull a lot of reports on time management, to learn where everyone’s time is going so we can solve different problems. And because of that, we’re able to maximize our efficiency across the board and make sure the team is spending their time working on things they want to be working on, which makes for a happier and more productive North Star!

Game nights! A fun one we all like to play together is Sequence.

Best thing to do on a sunny summer day?

Have a picnic at the beach.

Kids movie you could watch over and over?

Big Hero 6! I love that movie.

TV show you put on when you want a good laugh?

Community. My favorite episode of any TV show ever is Remedial Chaos Theory, it is the funniest episode of anything I’ve ever seen.

We use cookies to ensure that we give you the best experience on our website. If you continue to use this site we will assume that you are happy with it.Ok