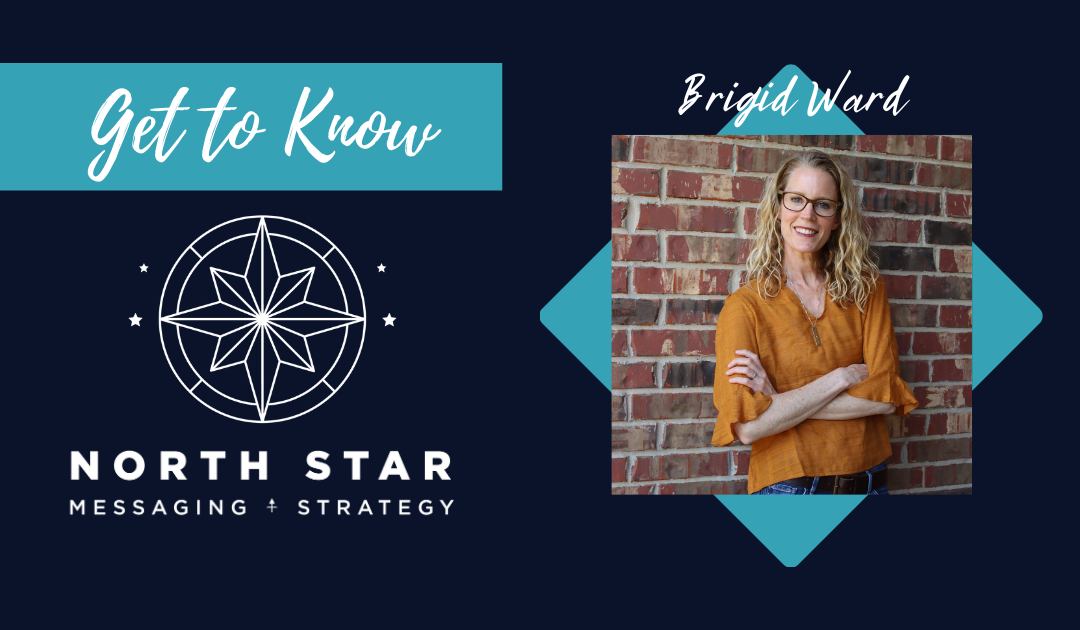 Each month, we’ll introduce you to one of our amazing team members. Today you’ll meet Brigid Ward, our incredible Chief Operating Officer (COO).

Brigid joined North Star in January 2017 as the company’s online business manager, moving into her current position in 2018. A graduate of the University of St. Thomas, Brigid was a French + political science double major, who previously worked in advertising and marketing, developing her proficiency in project management. In addition to her work with North Star, Brigid also assists several other companies as a fractional COO, helping them manage their teams, systems, and processes.

Q: How is North Star different from other companies you’ve worked for?

Brigid: They are so, so good. When they say they’re gonna do something, they do it. They think they’re disorganized, yet they’re probably the most organized people I know that are running their own business. They batch their podcast for content, we’re already a month ahead; other clients are like “Shit, I need to do a podcast today,” and I’m like, ‘I’ve been telling you that for three weeks.” Jessi and Marie are so good at making sure they block out that time, and they just get it done.

Q: There’s been quite a bit of change with the company since you first came on board. What has that journey looked like from your viewpoint?

Brigid: Revenue-wise, it’s tripled or quadrupled since I’ve started with them. So that’s been wonderful to see. The number of people: we were 3, now we’re 15.

Q: How has your role changed since you first started with North Star?

So a lot of that stuff has now fallen under me. Back in the day when I started off, I would just schedule the emails and I would set up systems. Jessi would attest to this, she had the most complicated funnel inside of ActiveCampaign. We’ve simplified that stuff, just really taken a lot of that stuff off their plates.

Q: Any new skills you had to learn?

Brigid: Hiring people. I had never done all of that, but now I realize I’m actually kind of good at it. I did the whole hiring of our newest team member, a Project Coordinator named Hannah Abrams, meaning I did all the nine or ten interviews with people, and then I narrowed it down and then handed it off to Natasha Singh, North Star Project Manager. When everyone else met Hannah, that’s when Jessi and Marie met Hannah. I’ve gotten so good at knowing what they’re looking for, especially on project managers and whatnot. For writers, I can do the initial review process to pick out the final group of interviewees.

Q: What did you learn about being an executive from your pre-executive days?

Brigid: One of the biggest skills that I take away is my relationship-building skills. Because back in corporate, when I was sitting at my cubicle, it was like Lucy’s sign in Peanuts, ‘Advice for five cents.’ I think I had a sign above my desk because I was in a sea of cubicles, but everybody would come to my desk. People must have said “Oh, go ask Brigid. She knows.” And I would have people come to me all the time, asking “Hey Brigid, can you do this for me?” or “Do you know someone who can do this?” I always had an answer because I was connected.

Q: What are the most important qualities that you want to bring to the North Star team?

Brigid: For me, it’s a level of integrity and respect. I want to be there to be able to support as much as I possibly can. To me, that’s the most important thing.

And my other thing is protecting Jessi and Marie. I have a a reminder on my phone to ping them on Friday afternoons to remind them to log off and end their day if they haven’t already. I’ve had times where we’re pinging each other at 8 o’clock at night and I’m like, no more! You ladies need to stop. Get offline and enjoy your weekends.

Q: What excites you the most about North Star’s future?

Brigid: Oh, I think there’s a lot to be hopeful for. There’s a new project coming down the pipeline and I just did the invoice yesterday, I stopped and dropped and did everything for it. If it works out, we’ll share it with everybody, but it was so exciting.

And the type of clients we’re attracting, the growth that I want to see and the ability to let Jessi and Marie back off of some of the day-to-day stuff. They’re taking a month off this year to test that. They keep telling me I need a month off, and I’m like, I have kids. I’m never going to take them up on that, two weeks is the best that I can do. But the reality is that’s a big goal for the company, to be able to allow everybody to have the opportunity to take extended time off if they need it.

Q: What’s your favorite part about working with North Star?

Brigid: They’re my favorite people, ever.

If you saw Jessi and Marie four years ago and where they are today, it’s night and day. They would have never done video content back then. I literally was like, I really think we should do some video. And they looked at me with starry eyes, like, are you kidding me? We’re never doing video! And then I told them they should do a podcast, but they said “No, no, no.” It took us three years, but now we do videos and have a podcast. They hear me. It just needs to sink in for a while, but they’re so smart and they’re so good.

They love to tell me that they’re my worst client ever. They’re like, “You must hate us, we’re the worst.” And I always tell them, they’re my best clients.

They’re super organized. They’re amazing. I just see so much potential for them. They soak up everything they can possibly soak up to help improve and support the team and the business, to move forward and scale. They just want to do what’s best for everybody in every situation.

Q: When you’re not working, what do you like to do to relax?

Brigid: Really, it’s hanging out with my husband and my sons. They all make me laugh so hard. I like to work out every day, I’m on day 280-something straight right now. I love to read, love to watch sports. We love watching Premier League soccer. I go for a run every weekend. Just hanging, playing board games, playing cards, laughing our asses off together. They’re my boys. They’re just dorks but yeah, it’s good. Really, it’s family time.

Chocolate chip cookies. Never have them, but that’s my guilty pleasure.

Psych, right now. But if you asked a month ago, it would have been Veronica Mars.

Best movie to watch on a Friday night with a bowl of popcorn and some candy?

Our favorite movie of all-time is Shawshank Redemption.

Song that you can’t help but sing along with?

“Jack and Diane” by John Mellencamp.

Place you want to visit but haven’t yet?

Ohhhhh, I want to go to Vietnam. We were watching Somebody Feed Phil on Netflix, it’s so funny, he visits these different countries and tastes their food, it’s awesome. And we’re vegans, but we might become pescatarians if we go there.

Learn more about the rest of the North Star team with our Get to Know North Star series. Up next: Editorial + Development Manager Maggie Grimason.