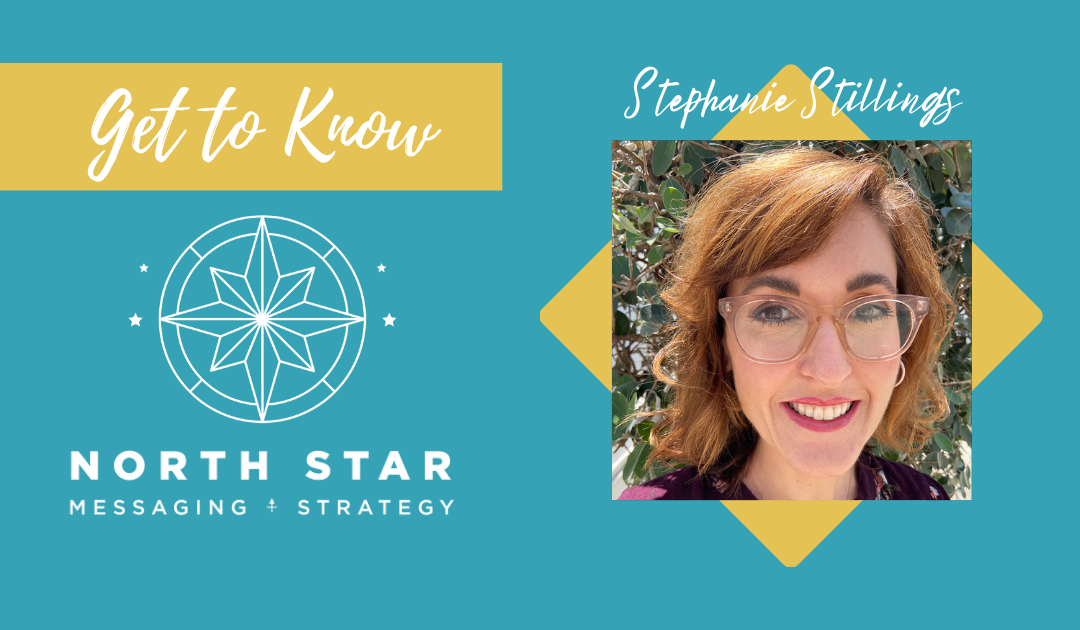 Today you’ll meet Stephanie Stillings, one of our talented copywriters and editors.

Born and raised in Southern California, Stephanie has spent her entire career working in and around marketing and branding, as a copywriter, marketing consultant, project manager, communications specialist, and more.

In addition to her work with North Star, she is also a senior marketing communications specialist at a global travel brand. She has previously worked in non-profit and healthcare fields as well as with marketing firms. Stephanie joined the North Star team in 2020 as a project manager before transitioning over into her current role on our writing team.

Q: Your career has seen you hold positions in both managing and writing at various times. What has that journey been like?

Stephanie: I was lucky to start my career in the non-profit sector doing development work, wearing many different hats as I worked on direct appeal letters, fundraising events, and grant proposals. Writing, in some capacity, was the common thread among all of my early professional experiences.

Then, in 2014, the organization where I worked received a huge series of grants to build or renovate new healthcare facilities, and I was groomed to be the project manager. My favorite part of those projects was communicating the latest construction and programming updates to all of the key stakeholders: donors, staff, future patients, and more. I learned so much about how to tailor a message to a specific target audience. I was also very involved with planning for the grand opening celebration and for opening day when each facility started seeing patients. Over time, I realized that I was doing marketing-communications work (with a little bit of branding thrown in here and there), and that’s what I’ve been doing ever since. Sometimes I wear my project manager hat and other times I’m churning out copy. I love it all and appreciate the variety that I’ve experienced along my journey.

Q: What did high school Stephanie think about her career?

Stephanie: I didn’t think so much about my career, per se, as much as I was motivated to find a way to live and work abroad. When I transferred into Occidental College during my sophomore year, I had to pick a major fairly quickly. They had a really unique program, Diplomacy and World Affairs: with that, you could do a semester in the fall at the UN, in New York City. When I heard all about that, I said, ‘Sign me up, that’s what I want to do.’

I did travel a lot in college and immediately after graduation. But after meeting so many people who worked for the UN or an international organization, I talked myself out of that career for a variety of reasons. I wasn’t sure I wanted to stay abroad and have that kind of lifestyle, but I did like organizations with a positive social impact. That’s how I got into non-profit work. As much as I’d thought about living abroad and working on social issues in Africa, I realized I can solve problems here at home.

Q: What was that semester in the United Nations like?

Stephanie: It was incredible. I worked in the department of peacekeeping. There was a small mission in Ethiopia, so I had to read the news that was coming in from the office there, and then I would write up a summary that got read to the Security Council. It was fascinating to be part of that work.

Q: Did you always love writing?

Stephanie: I think so, that was always my strongest subject in school, as opposed to science or math. I was more of a history and English and creative writing type.

Q: At what point in your education or career did you realize that you had real strengths in the marketing writing arena?

Stephanie: I would say it was my first job when I was fundraising and writing direct appeal letters to raise money for the organization. I realized if I could find a compelling story from one of the people we were serving, or if I could describe in words the hope and the future that we can give people through our services, that can persuade someone to donate. And we can get them really psyched about our mission and the work that we’re doing, and they’ll either pledge money or they’ll come volunteer. There was just something really powerful in that I liked, and from there I eventually started doing grant writing. And today I’m still trying to connect with an audience and give them something of value through my marketing writing or compel them to take a particular action through sales copy.

Q: What do you think other companies get wrong when it comes to their marketing and branding?

Stephanie: I think it’s more about process. A lot of companies, or a lot of people at companies, don’t plan ahead very well. I find that a lot of things that come up are always last minute: ‘This is the new priority of the week, and everybody has to pivot.’ And that’s really difficult on employees. Long-range planning for marketing and branding efforts is essential, especially with how priorities can shift during uncertain times.

Q: You’ve already worn a number of hats in your time here at North Star. What have you learned about the company?

Stephanie: It’s confirmed for me that emails, social content, and other types of marketing assets can be outsourced. I’ve worked at companies in the past where they’ve been concerned about outsourcing content, worrying the quality might not be there or that it might not sound like them. And after being at North Star, I see how talented the team is. I see that we have a really defined process that hones the brand voice. It’s definitely possible for companies to outsource as long as they’re working with people like North Star who know what they’re doing.

Q: What do you think it is about North Star that enables us to outsource content so well?

Stephanie: The Brand Voice process. Taking that time right up front with people, getting to know the brand, getting to know how they talk to their audience, who their audience is. Spending a lot of time on the terminology—what to say, how to say it, what not to say—is super critical. I’ve worked with many brand style guides before but nothing as developed as what we prepare for the average North Star client. I think what North Star does is really robust in that way and that’s part of what makes it so effective. And then obviously the fact that there’s a big difference between hiring North Star and hiring someone on Upwork, where you’re just getting one person. You get our whole team and I think that’s part of the secret sauce that makes North Star so successful.

Q: Are there any lessons or skills from your background that you feel you’ve been able to utilize to help North Star do anything new or different?

Stephanie: When I was doing project management work in the summer of 2020, I really tried to add value in some different ways: help streamline some internal processes, have positive interactions with the clients, our writers, and our editors. Not that I was perfect, but I certainly tried to set up tasks in the project management software and really think through: does the person who’s going to pick this up have what they need to do the work? I tried to make sure everyone had what they needed to do their part on each client project.

Q: Are there certain types of content you’ve really clicked at creating?

Stephanie: I would say what’s clicked for me, and I didn’t expect it, were emails. I didn’t think I was going to enjoy writing them, and I worried they would feel repetitive. But for our clients, I’ve really enjoyed them. Trying to have impact with brevity is a fun challenge: ‘I only have 15 words for this section, better make them count!’

Concert you wish you could have attended?

The Rolling Stones… sometime in their heyday.

Either a noodle soup like Pho or pan-fried noodles—the greasier, the better.

What would be your dream cruise itinerary?

I’ve taken a lot of cruises in the US and Europe. The next one we’re planning is to a completely different part of the world—Australia and New Zealand.

Favorite song to sing along to in the car?

“Stubborn Love.” My boyfriend and I are fans of The Lumineers.